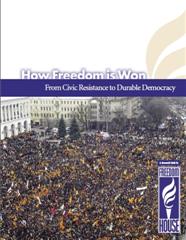 Reading the report from Freedom House I mentioned in my earlier post titled How Freedom Is Won: From Civic Struggle to Durable Democracy, I found the following section that supported arguments I made earlier (page 14).

Provide Enhanced Resources for Independent Media and Communications
Authoritarian leaders lack democratic legitimacy, and this lack of legitimacy needs to be challenged by democratic civic forces. But because repressive governments limit or control media and communications, pro-democracy activists must develop independent outlets of communication in order to stake their claim to represent the legitimate aspirations of the people. Invaluable in this effort are the Internet; independent newspapers and newsletters; unauthorized or external broadcast facilities; and cell phones, satellite phones, and text-messaging devices.

Independent communications and media are essential in mobilizing indigenous support for nonviolent resistance against a ruling elite. They also are crucial in helping opposition groups reach out to potential allies among disaffected members of the ruling elite, including segments of the defense and security services. Communications and alternative media can help civic opposition movements in making the case that they offer a viable alternative to illegitimate authoritarian rule.

In this way they can erode support for authoritarians among their crucial pillars of power.