Skip to content
HomeResponsibility to Protect: Myanmar and Sri Lanka

Following up my previous post (Myanmar: The urgent need for communications and collaboration) I’ve been fairly skeptical at best about the “right / responsibility to protect” doctrine of the UN. It sounds like a great idea, but in practice is fraught with the dangers of abuse leave aside the legacy of such interventions for government, NGOs and local communities. The viciousness with which is was greeted in Sri Lanka lately, entirely for parochial reasons of the Government, nevertheless demonstrated the very real challenges associated with the establishment of R2P and consensus as to when, where, with whom and how it will be applied.

And it’s not as if the UN Security Council will easily come to any agreement on R2P either. Further, UN OCHA’s head honcho John Holmes earlier this month expressed his scepticism that the Right to Protect would help in any significant way in Myanmar:

In response to a correspondent’s question on the suggestion that the United Nations should invoke “the right to protect” to force the Government to accept international assistance, he stated that he did not think it would help, at the moment, to embark on what could be seen, at least by some people, as being on a confrontational path.  The United Nations was having useful and constructive discussions with the authorities and things were moving in the right direction, even though the United Nations wanted it to move faster.

In any situation like this, the Government, as the sovereign authority, was in charge of the aid efforts, he explained.  What the United Nations tried to do was to support the Government’s aid efforts as much as possible.  The present situation was no different from any other disaster, in that sense.

In an article that dealt with Bernard Kouchner, the French foreign minister’s proposal to invoke R2P in Myanmar to grant aid workers access to the country, Gareth Evans says that

The point about “the responsibility to protect” as it was originally conceived, and eventually embraced at the world summit – as I well know, as one of the original architects of the doctrine, having co-chaired the international commission that gave birth to it – is that it is not about human security generally, or protecting people from the impact of natural disasters, or the ravages of HIV-Aids or anything of that kind. Rather, “R2P” is about protecting vulnerable populations from “genocide, war crimes, ethnic cleansing and crimes against humanity” in ways that we have all too miserably often failed to do in the past.

Importantly however, Gareth goes on to note that the case of Myanmar presents a prima facie case for the application of R2P.

If what the generals are now doing, in effectively denying relief to hundreds of thousands of people at real and immediate risk of death, can itself be characterised as a crime against humanity, then the responsibility to protect principle does indeed kick in… There is, as always, lots for the lawyers to argue about in all of this, not least on the question of intent. And there will be lots for the security council to quarrel about as to whether air drops and the like are justified, legally, morally and practically. But when a government default is as grave as the course on which the Burmese generals now seem to be set, there is at least a prima facie case to answer for their intransigence being a crime against humanity – of a kind which would attract the responsibility to protect principle. And that bears thinking about, fast, both by the security council, and the generals.

We may question the moral authority of Gareth to say what he does, given his complicity in propping up Suharto’s brutal regime in Indonesia, but the argument he makes is an interesting one. In Burma and the Responsibility to Empower Patrick Meier suggests that “…it is high time we shift to people-centered disaster/conflict early warning & response” but notes accurately that State based disaster mitigation interventions are far from timely and efficient. As a solution, Patrick suggests “more decentralized and tactical approaches to rapid response”. I’ll be interested to find out what that actually means esp. in a situation like Myanmar. Does a people-centered approach push sovereignty aside? Would tactical responses include hostile air drops over affected areas? 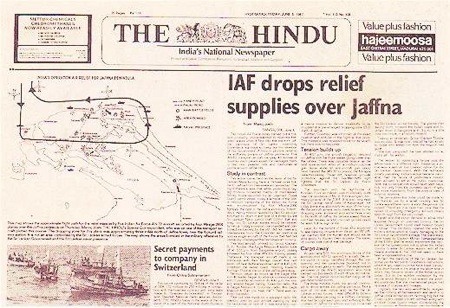 Well over a decade ago, Operation Poomalai smacks of R2P – a hostile air drop by the Indian Air Force into a besieged city in the embattled North of Sri Lanka. Events after the airdrop led to the lifting of the siege onJaffna and the declaration of a cease-fire with the LTTE. However, this led to the disastrous Indian military intervention at the invitation of the Sri Lankan government that ended in their ignoble departure from Sri Lanka, leaving the country no better than when they came in to deal with the terrorist problems that were the cause of many humanitarian crises.

Point is, even if R2P is invoked and the humanitarian community goes in to Myanmar, there is no guarantee at all that the junta will change. It’s also entirely possible that the humanitarian agenda at first leads to a more openly political one very quickly, mirroring then the situation now in Iraq where armed forces that went in on a false premise now can’t get out or stay on. Catch 22. In Myanmar this would mean, if the regime is to be changed, possibly billions of dollars of aid over the long term to set up mechanisms of democratic governance including national level ICT infrastructure.

I wonder if the International Community is up to the task? What if it fails to muster the resources? What happens when the global media moves on, as it invariably will, to the next disaster? What happens to Darfur if resources allocated there are now shifted to Myanmar?

What happens when everyone has moved on and all that a citizen is left in Myanmar is a mobile? Should the legacy of all humanitarian aid be to ensure that communities who can communicate are the best defense against disasters and the strongest bulwark against the erosion of democracy?

2 thoughts on “Responsibility to Protect: Myanmar and Sri Lanka”