Skip to content
Sanjana ICTs in general May 6, 2009 2 Minutes 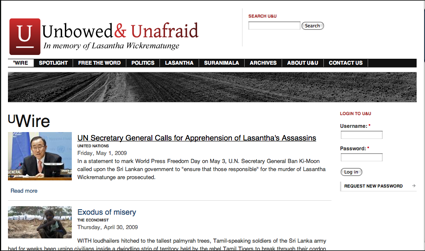 A new website – Unbowed and Unafraid – to be officially launched on 8th May, aims to continue the spirit of investigative journalism of the slain Editor of the Sunday Leader, Lasantha Wickrematunge.

What then, of Lasantha’s murder? Within hours of his assassination, President Rajapakse promised a full inquiry and promised to bring the perpetrators to justice. Of course, no such thing has happened. Almost  four months have passed, and all we have seen is a cover up. There has been no meaningful investigation, no trace of the vehicles used in the assassination, no call for information on the murder weapon, and even the cause of death has been deliberately smudged so as to derail a future investigation.

At a time when no other newspaper in Sri Lanka would publish Sonali’s letter to the Inspector General of Police, I did on Groundviews. Both the acceptance speech (that you can read here in full) and the letter to the IGP point to very serious challenges facing freedom of expression and media freedom in Sri Lanka. It is indubitable that the Rajapakse regime, with great success, has stifled dissent in the country and in its place, instilled anxiety and fear.

There is a great irony here too. Lasantha in life did not leverage, to any degree, the power of the web and Internet in the practice of his journalism or the Leader’s dissemination of news. The Sunday Leader website remains archaic and is possibly the worst amongst all traditional English newspaper websites in Sri Lanka. Invesigative and indepedent journalism in Sri Lanka is still hostage to a broadcast and broadsheet model, which is clearly unworkable given the Rajapakse regime’s dispensation. This is where new individual voices of dissent, new architectures of dissent on the web and citizen journalists are play an increasingly important and influential role – packing a punch much greater than their limited readership on the web.

Whatever the Rejapakse regime says to the contrary, media freedom in Sri Lanka is a distant aspiration today, not a reality. It will get worse. This is why there must be more focussed interest in and support of new media initiatives that can support both traditional journalists and citizen journalists to report as Lasantha did – unbowed and unafraid.

An Ashoka, Rotary World Peace and TED Fellow, I have since 2002 explored and advocated the use of Information and Communications Technologies (ICTs) to strengthen peace, reconciliation,human rights & democratic governance. I founded and for eleven years curated the award winning Groundviews, Sri Lanka's first citizen journalism website. I specialise in, advise and train on new media literacy, web activism, digital security and online advocacy in Sri Lanka and internationally. With the UN and other actors, through the ICT4Peace Foundation, I also work extensively on the advancement of information management during crises, both sudden-onset as well as protracted. For well over a decade, I have trained digital security for activists and journalists in South Asia, South East Asia, Europe and the Balkans and focus on using a wide spectrum technology to capture, disseminate and archive vital stories in austere, violent human rights contexts. I am currently pursuing doctoral studies at the University of Otago, New Zealand on social media and politics. View all posts by Sanjana

One thought on “Unbowed and unafraid: New website in memory of Lasantha Wickrematunge”