Skip to content
Sanjana ICT for Peacebuilding, ICTs in general May 13, 2009 3 Minutes

Recent and raging controversies over the on-going shelling of civilians brings to the fore the use of satellite imagery in Sri Lanka to flag possible crimes against humanity. The most recent imagery comes from commercial satellites, with image analysis by Human Rights Watch that clearly indicates that shelling is taking place unabated.

The full report is available here. 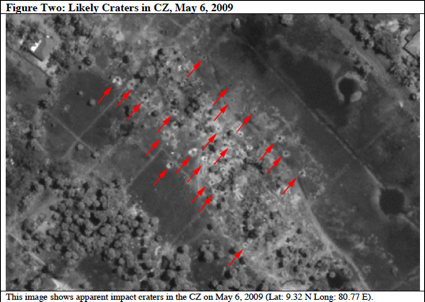 It’s interesting that this increasing emphasis on and use of satellite imagery by domestic and international actors comes at this juncture. Compelling initiatives such as Eyes of Darfur on the web by Amnesty and Crisis in Darfur by the US Holocaust Museum on Google Earth are models for bearing witness to attacks against civilians from space. It however the first time that such technology is being use to scrutinise the violence in Sri Lanka. However, it is not the first time civilians have been targetted in the Vanni – for decades they have suffered the brunt of attacks by the LTTE with the resulting displacement a more enduring human tragedy without witness.

In recent weeks however, attacks by the Army against the LTTE and vice versa have resulted in horrific collateral. Every single report that notes the Army has targetted innocent civilians meets four familar and vicious responses from the Government – (a) that they have not, (b) that it is the LTTE doing all the shelling, (c) that reports which seek to portray the excesses of the Army are LTTE propaganda, and finally (d) that it is the LTTE which is holding civilians hostage and putting them in harms way.

It is not necessary to go into a zero sum perpetrator / victim debate, if only because it is a convenient escape for immediate and meaningful action to stop the on-going carnage. Civilians in the Vanni are dying in their hundreds every single week, and someone in Sri Lanka is killing them. They are dying out of starvation, they are dying as a result of shelling aimed at them, they are dying in shelters, they are dying in hospitals. 106 children died over the Vesak weekend alone, which is the kind of figure I find hard to grasp.

This is no genocide, but it is a living hell. Visual evidence comes in the form of imagery in the public domain of the so called ‘safe zones’ HRW’s Google Earth layer for the most recent imagery of shelling is at a lower resolution than what is shown in their latest report on on-going hostilities in the Vanni. It nevertheless shows how densely populated the ‘safe zone’ is, with horrific conditions on the ground that only rare footage has showcased to the world.

That HRW has moved to commercial satellite imagery is obviously the result of the recent furore over leaked UN satellite imagery finding its way into their reports and global media. Unless the argument is made that commercial satellite imagery is also pro-LTTE, this is irrefutable evidence that both sides are still engaging in shelling despite promises to the contrary. In the case of the LTTE, lies and duplicity are expected. In the case of the government, it is sadly no different bnut more tragic because of its claims to be representative of peoples living in and supporting a democracy.

Can satellite imagery stop the shelling? I doubt it. They are however images for posterity, images now commercially available and well beyond the reach of the LTTE or Government to censor and hide. These are images that will continue to make public the violence on the ground. Bearing witness is a silent project, but a necessary one. Technology makes this possible today to a degree unthinkable in the past, where a war really could be hidden from global scrutiny.

On a more general level, the use of satellite imagery for human rights is a discussion I’ve had on this blog with luminaries like Paul Currion and Patrick Philippe Meier in posts such as Geo-location and human rights and Human Rights 2.0? As I note in an almost apocryphal manner  in the latter,

So whether it be in helping record incidents or locating them on a map, new technologies give activists new ways to hold those who violate human rights accountable for their actions…What matters is not Human Rights 2.0, but about being as much of a pain in the arse as possible to those who violate human rights, by recording for posterity and with as much detail as possible, crimes against humanity and human decency.

One thought on “Bearing witness to carnage from space”