Up until now, I’ve used Colombo eMap whenever I’ve wanted to plot a route in Colombo. Now there’s a better option.

Although it’s yet to percolate to the mobile version, Google Maps on the web now has street level information in Colombo and Kandy. Click the image above for a higher resolution screenshot. Google Maps also features photos and videos from users, so it’s only a while before Colombo and Kandy are nicely geo-annotated and referenced.

Compare Google Maps to the information available on Microsoft’s Virtual Earth, and the difference is evident. Click the image below.

With the Ministry of Defense ban on GPS on mobiles now lifted (it’s unclear if the ban was ever official and gazetted) we may see later this year the growth of the same types of location based services available in places such as New York that combine the power of GPS, Google Maps and mobiles. At the very least, it’s now much easier to tell someone exactly where one is located in Colombo. On the downside, the Google Maps only has the current road names – Flower Road for example is Sir Ernest De Silva Road – a name which few know and use.

Still, I’m excited at the prospect the information that allows one to discover a city and explore its features (bars to restaurants, temples to museums, parks to bargains) is coming home.

Google Maps (on the PC or on mobiles) is not that useful in Sri Lanka, but I was in Copenhagen this week and using it on my Blackberry I was able to locate my hotel as I was walking along. The street level detail is quite amazing and coupled with the Blackberry 8310’s GPS, the accuracy in a city that Google has a lot of GIS information on is astounding.

Google’s now released a new version of Google Maps for mobiles, which I just downloaded. It’s more responsive than the previous version for me and the graphics, even for Colombo, seem sharper. For select cities, the new version includes street views, a feature hitherto only found on the desktop client.

My only concern – roaming data charges. In Denmark it cost DKK 75 per megabyte, and while this is quite sufficient for emails, running data hungry apps like Google Maps could run up quite a bill.

That said, can’t wait to try out the new Google Maps version in a city that Google supports street view.

I’ve been working on Google Maps (GM) quite a bit lately to map incidents and trends related to humanitarian access, election violence and human rights. It’s exciting to note that Google has now released a Google Earth (GE) plug-in for browsers that allows for a richer, 3D experience provided you have the bandwidth to spare.

A recent BBC Click story put the number of those who had downloaded Google Earth in the hundreds of millions. But the story fails to note how many of those who downloaded it actually use it regularly and of that subset, how many use it to view the more serious layers available for it (on climate change, on refugees, on genocide) instead of just looking at the roof of their home from space or walking down virtually through the same roads they would travel on in real life…

My experience with GIS with the NGO sector in Sri Lanka is that no one really has heard about it! I’ve been trying without much success to introduce it to the work of HR and humanitarian organisations with a large local footprint for close upon two years, but the significant human resource (and financial) investment that needs to go into data manipulation, analysis, plotting and sustaining that kind of operation is not something that has convinced organisations to embrace this. So what you find are the more hobbyist non-specialist GM / GE activists like moi, who use it with what they have in the hope that by example and by its use in advocacy, more people will see its benefits. (The interest in CMEV’s elections violations maps, the first of their kind in Sri Lanka, suggests that this could be the way forward in getting more widespread awareness and use of mapping for advocacy) .

And I may be the only one, but I find GE sometimes an overkill and hard to use. I find that the GM API’s offer more flexibility in this regard particularly for web integration and web based advocacy, but don’t have the programming knowledge myself to use leverage them, having instead to rely on coders who are already pressed for time with paid deadlines.

The new GE web browser plug-in may help bring in a lasting “wow” factor to map based advocacy, with as the Google LatLong blog notes, with just a single line of code.Only one problem. Only Windows is supported at the moment.

When the frack will these organisations realise that not everyone runs, or cares to run, Windows?

Anyone interested in pursuing the pros and cons of GE / GM should read Paul Currion’s excellent commentary here and the paper referenced on it. 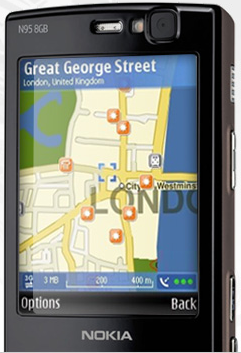 You can already get Google Maps on the iPhone and now Nokia’s created a technology of its own to get location data to its higher end handsets. New to Nokia’s OVI platform is the maps feature that runs on Vista / XP and most of Nokia’s N-series and Symbian handsets.

Wired Gadget Lab has a short review here and you can download the application from here. If someone gets this working, let me know if Colombo is featured on it?

“Google Earth supposedly shows in great detail where the damage is being done on the ground. It occurs to me that it will be useful to keep a record of this, if one is thinking long-term. For the reconciliation process to occur at the local level the truth of what happened will first have to come out. Guys looking to do something – any techies out there willing to do a mashup of where the violence and destruction is occurring using Google Maps?”


Ory Okolloh, aka Kenyan Pundit, is who started it all.

Ushahidi is quite frankly an inspired and inspiring use of ICTs, including mobile phones, to bear witness to, record and facilitate action against the most dispiriting post-election violence in Kenya. It is one of the best mashups this author has seen dealing with the reporting and documenting of post-election violence and communal unrest, as well as a tool that facilitates international and local help to affected communities and victims.

I’ve passed this website around to a few people as the first meaningful application of an idea I first touted in 2006 talking about SMS, MMS and Google Maps mashups:

Rather than think of Citizen Media only as a text based initiative, mash-ups that match SMS location data with MMS / SMS messages onto a map, allowing users to browse through locations and messages related to that location, but also see an interactive timeline of the development of message clusters on a map, would have tremendous applications in mapping violence, confidence in peace, IDP movements and a whole raft of other issues.

At the beginning of a project like this the technology portion can seem to be the hardest to get off the ground. In the end, it’s just the tool, and the hard work will come from people in the field who are working with NGO’s to keep this information accurate and to chronicle as much of it as they can..

The tool allows for those on the ground to send in situation reports and alerts via the web and mobile phones. At the same time, the Kenyan government was warning mobile phone users of possible prosecution if they use SMS to cause public unrest, “The Ministry of Internal Security urges you to please desist from sending or forwarding any SMS that may cause public unrest. This may lead to your prosecution.”

Others note the importance of going beyond technology to address the needs and concerns of those on the ground,

While blogging, emails, Twitter and the internet are doing a great deal of good getting the news out of what’s going on in Kenya to the rest of the world, I find myself troubled. You see, the communication that needs to be happening is at the grassroots level. Everyday Kenyans do not have access to any of these services. Let’s put our minds and capabilities towards solving real problems for people beyond the technologically elite.

While in principle agreeing that a technocratic approach to conflict resolution has its significant short-comings, I don’t agree with the sentiment above.

This suggests that the information presented on Ushahidi (Swahili for testimony) is somehow removed from the “real problems of real people”. As far as I can gather, Ushahidi is no work of fiction or a figment of the collective imagination of a few bloggers. By plotting violence, communal needs and actual incidents on a map, this becomes a vital record for the Kenyan State, NGOs and the international community including humanitarian agencies to know about and effectively plan for exigencies on the ground.

It is not just those who are connected (the “technologically (sic) elite”) who benefit, but all citizens, esp. those who don’t have access to technology. Those who choose to bear witness  and report violence may be individuals empowered to do so using ICTs ranging from PCs to mobiles, but important to recognise is that they do so on behalf of others as well. Technology facilitates actions and responses for ALL victims of (post-election) violence, not just those who send in the reports and who have mobiles or PCs.

I had the rare opportunity to meet and talk with Ory Okolloh at the Global Knowledge Partnership in Malaysia late last year and wish her the best in this and all her ventures to bring about an end to violence in her country.

For another idea that could be helpful in Ory’s case, take a look at this. For a more detailed account of the evolution of Ushahidi, read Global Voices Online.

Over a year ago I wrote Mobile Phone futures, with a few key ideas on how location-aware mobile devices / phones could potentially revolutionise how we navigate and get information on unfamiliar surroundings.

Google recently announced Google Maps with “My Location” technology that does just this for all mobile devices, whether they have built in GPS or not. For phones with built in GPS like the high end Nokia N95, the maps displays a constant location indicator. For phones without built-in GPS, it displays the current position based on some form of triangulation of cell phone towers.

Clearly a technology that has uses beyond navigating London or urban areas.