First posted on the ICT4Peace Foundation’s website on 17 June 2019.

On 20 May 2019, Sanjana Hattotuwa, a Special Advisor at the ICT4Peace Foundation since 2006, gave a well-attended public lecture at the University of Zurich on the role, reach and relevance of social media in responding to kinetic and digital violence, including the potential as well as existing challenges around artificial intelligence, machine learning and algorithmic curation. The lecture was anchored to on-going doctoral research, data-collection and writing on the terrorist attacks in Christchurch, New Zealand in March and the Easter Sunday suicide bombings in Sri Lanka – Sanjana’s home. 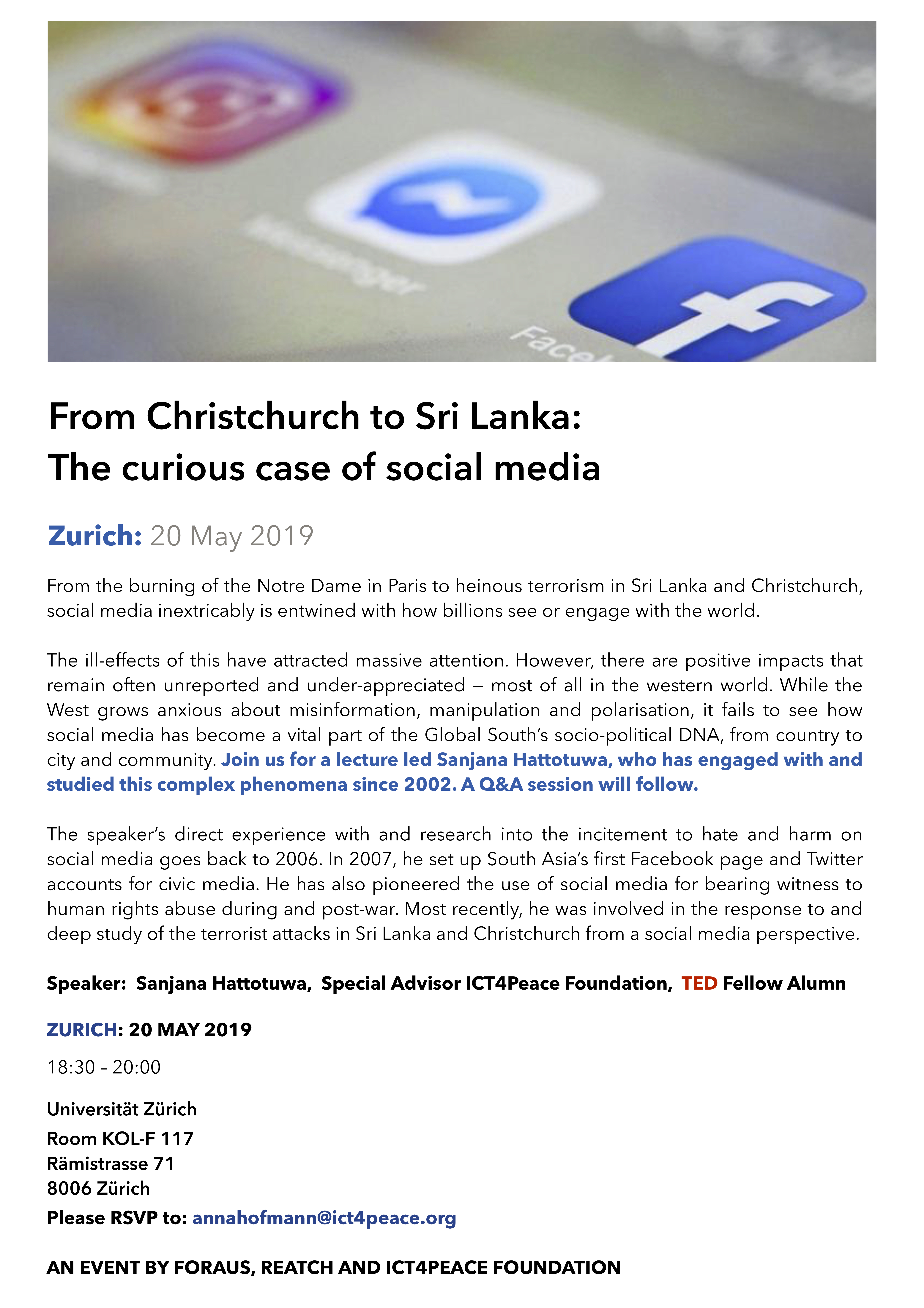 A video of the full lecture, also requested by those who couldn’t attend the lecture in person, is now available on YouTube and embedded below.

The full slide deck used in the lecture can be downloaded as a PDF here. It’s also embedded below.

Sanjana’s presentation started with an overview of his doctoral research and scope of data-collection, anchored to Facebook and Twitter in particular. The daily capture and study of this data gives him perspectives at both a macro-level (quantitative) and with more precise granular detail (qualitative) which help in unpacking drivers of violence, key voices, leitmotifs and other key strains of conversations on social media after a violent incident. Comparing the terrorist incidents in Christchurch and Sri Lanka, Sanjana contextualised the global media coverage around both incidents and in particular, the criticism against social media following the live-streaming of the Christchurch incident. Calling social media an ‘accelerant for infamy’, Sanjana proposed an original thesis around how the science of murmuration and the study of mob mentality (based on the three key principles of adhesion, cohesion and repulsion), when applied to conversational and content related dynamics online, could provide insights into how violence spread and generated new audiences.

Sanjana then spoke about artificial intelligence (AI), and despite the more common framing by mainstream media, significant challenges around AI-based content curation faced by leading social media companies at present. Aside from Facebook and Twitter, Sanjana flagged the extremely problematic recommendation engines of YouTube, including the recent misrepresentation of the Notre Dame fire. Using two images, he also flagged how even the simplest of manipulation still baffled the most sophisticated of AI, looking at image classification (which is central to the identification of violent or hateful content online).

Using Sinhala – a language spoken only in Sri Lanka – Sanjana highlighted the challenges of natural language processing (NLP), which akin to AI, was central to content curation at scale. In one slide, he typed Sinhalese characters and in another, showed an image with characters embedded into it, noting something different to what was typed. Sanjana noted that the first, by itself, presented a number of challenges for companies that had for too long ignored the likes of Sinhalese or Burmese content generated on their platforms, while the second compounded those issues, by presenting to AI and ML architectures nuance, context and script training datasets at present aren’t based around or on.

Sanjana then went on to explain the dangerous consequences of ‘context conflation’ in a country or context with very high adult literacy and very poor media literacy. While some or all of this is known, Sanjana went on to then frame and focus, through hard data, the manner in which Twitter provided a global platform after the violence in Christchurch for people to discuss solidarity, express sadness and generate strength. A conversation far removed from hateful right-wing ideology or the promotion of violence took place, rapidly and vibrantly, on the same social media platforms that the global mainstream media chastised for having played a central role in the promotion of violence. Noting the unprecedented constitutional crisis in Sri Lanka late-2018 as well as the content produced after the Easter Sunday attacks, Sanjana again highlighted how social media in general, and Facebook and Twitter in particular – played a central role in democracy promotion, dissent, activism, pushback against authoritarian creep and the promotion of non-violent frames after a heinous terrorist attack.

Sanjana underscored why the #deletefacebook movement in the West would never take root in countries like Myanmar or Sri Lanka, and was a risible suggestion to hundreds of millions using Facebook’s spectrum of apps and services. He noted the dangers around the emulation, adaptation or adoption of regulation from the West in countries with a democratic deficit, while at the same time noting the importance of regulation’s introduction to govern companies that needed oversight to a greater degree than is present today. Linked to this, he noted that Silicon Valley’s business models were anchored to quantity over quality, and the generation of content irrespective of the timbre or tenor of that material – leading to the obvious weaponisation of platforms never meant to be Petrie dishes for terrorism and violent ideologies. Facebook’s recent pivot to privacy, announced by Mark Zuckerberg, Sanjana welcomed with cautious optimism, noting that while there was much to celebrate and welcome, it could also mean that academics would find it much harder or downright impossible, in the future, to study the generation and spread of violent extremism on social media. Sanjana spoke about social media as being central to the DNA of politics, political communication and social interactions in countries like Sri Lanka, noting that as a consequence, there is no alternative to the development of AI, ML and NLP techniques to deal with the tsunami of content generation growing apace, every day, already far beyond the ability of a few hundred humans to oversee and respond to. In both the penultimate and final slides, Sanjana spoke to the need to problematise the discussion of media and social media, noting how complex a landscape it really was, defying easy capture or explanation.

The lively and interesting Q&A session, which exceeded the allotted time, went into a number of aspects Sanjana touched on. The video above captures the Q&A segment as well.