Cross-posted from the ICT4Peace Foundation website. Originally published on 13 June 2019.

Special Advisor at the ICT4Peace Foundation, Sanjana Hattotuwa, joined the 2019 National Dialogues Conference via Skype video on 12 June to both present a short overview of the state-of-play and as a panellist discussing the interplay between politics, social media, conflict, peace and dialogue. As noted on the NDC’s website,

The National Dialogue Conferences are a continuation of conferences held in Helsinki, Finland since April 2014 onwards enjoying wide participation while deepening the understanding of dialogue processes among attendees. The Conference enables both a broad range of stakeholders from multiple countries and practitioners in the field internationally to take these collaborative lessons forward. These gatherings, familiarly known as NDCs, provide a space for joint reflection and in-depth discussion between practitioners, stakeholders and experts working with dialogue processes in different contexts. The Conference is organised by the Ministry for Foreign Affairs of Finland in cooperation with a consortium of NGOs consisting of Crisis Management Initiative, Felm and Finn Church Aid.

The panel consisted of,

Discussion on how to use digital media to prevent and counter hate speech and to mitigate its negative effects on #nationaldialogues by Achol Jok Mach, Ahmed Haji, @jukka_niva @sanjanah @sinnwahn pic.twitter.com/82bF9UexpI

Sanjana’s presentation, titled ‘New dialogic processes‘ was a rapid capture of developments in a field he has researched on and worked in for over 15 years, which as was noted in his presentation, was long before what is now a global interest in both the underlying issues thwarted effective dialogue and new technologies, that both strengthen and erode support democratic exchanges. 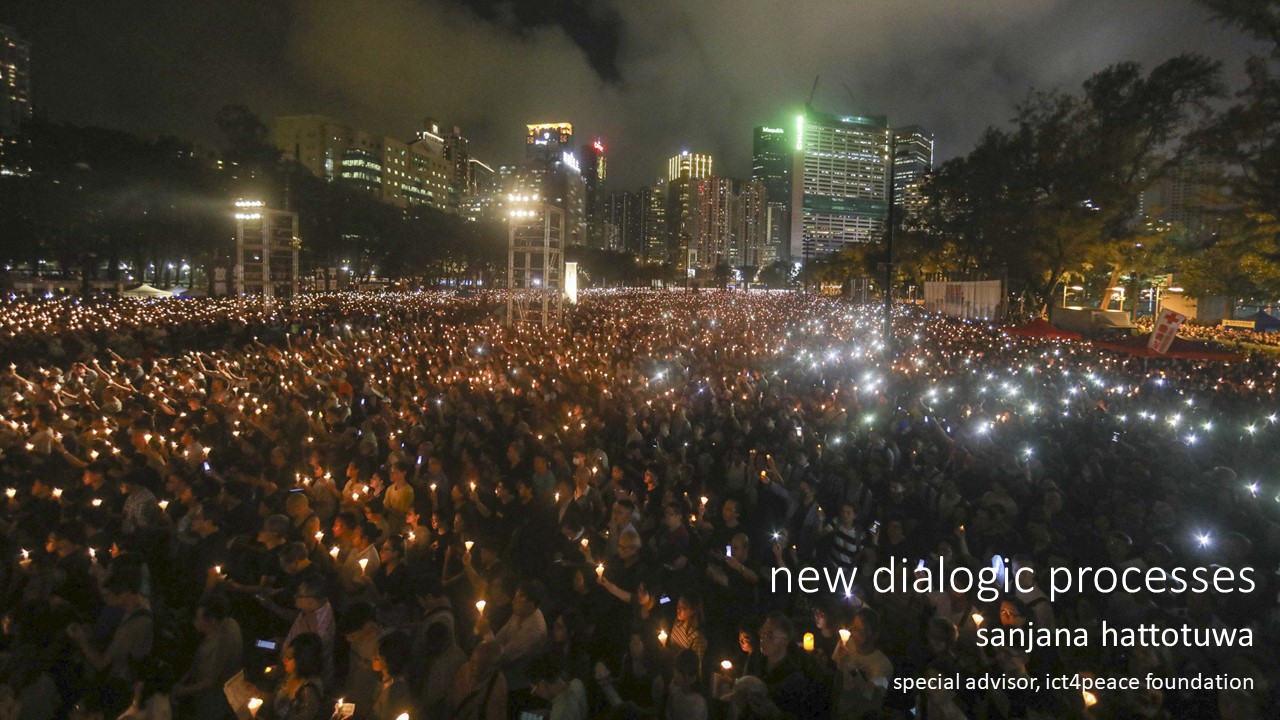 Download a copy of his presentation as a PDF here.

With a title slide showcasing what at the time of the presentation were unprecedented public demonstrations in Hong Kong, Sanjana flagged well over a decade of work on strategic communications and dialogue processes anchored to conflict transformation that started in Sri Lanka in 2002, and the One-Text negotiations process that at the time, was in part anchored to software architectures that Sanjana designed and managed. Sanjana referenced a paper written 15 years ago to the month (Untying the Gordian Knot: ICT for Conflict Transformation and Peacebuilding), that as part of his Masters research anchored to the One-Text process in Sri Lanka, looked at how technology could play a more meaningful role in conflict transformation and peace negotiations processes.

Looking at how unceasing waves of content influenced and informed public conversations, Sanjana briefly highlighted the many inter-related fields of study around dialogue processes and communications, or ‘complex media ecologies’. He then offered a way for non-experts to visualise the dynamics of (social media) dialogues in contemporary societies, through murmuration or the swarm effect seen in nature, akin to mob-mentality (sans the violence). Anchored to his doctoral research, Sanjana then looked at the Christchurch terrorist attack in March, and how at scale – involving hundreds of thousands of tweets around key hashtags – Twitter had in the 7 days after the violence, captured events and conversations around it. More central to his doctoral work, Sanjana then focussed on the media landscape in Sri Lanka, looking at both Twitter and Facebook.

Covering the general state of conversation, an unprecedented constitutional crisis, the commemoration of the end of war a decade ago and the Easter Sunday terrorist attack, Sanjana proposed that it didn’t make any sense – in Sri Lanka and arguably in other countries and contexts too – to distinguish social media as a category entirely distinct from or somehow different to mainstream or traditional media. Offering in-depth data-captures around the volume of content production, the deep biases present in the content and key dynamics of sharing and engagement, Sanjana showcased the ’emotional contagion’ effect of how content online impacted how people felt.

Ending with the 90-9-1 principle, Sanjana cautioned against the simplistic study and reading of content online as markers of the health or effectiveness of national dialogues. Far more than the technology, Sanjana focussed on the operational logic(s) of dialogues in complex media ecosystems that were pegged to language, manner of expression, context, media literacy and a range of other factors.

In the ensuing discussion, Sanjana expanded some of these points and highlighted Finland’s emphasis on media literacy with children as a template that other countries could follow, to deal with the threat of misinformation over the long-term. In the short-term, Sanjana underscored the importance of bringing into the room technology companies – who he said were now entrenched gatekeepers of news and information far more than they chose to disclose publicly – as well as cognitive neuroscience, to study more and better the art of communication especially in or applicable around complex, protracted violent conflict.